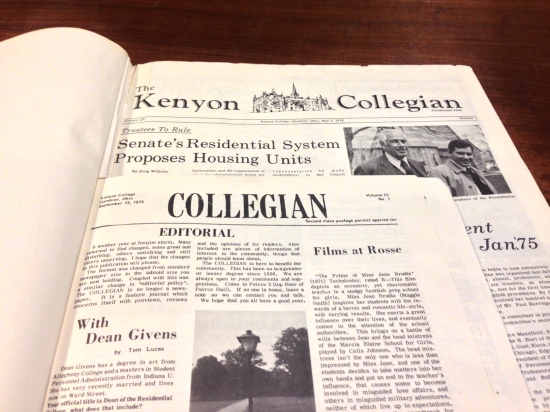 Welcome to another year of “From the Collegian Archives,” in which we explore the strangest and most historic events from the Collegian‘s past, brought to us with the help of our friends in the library archives. Today, we’re heading back to 1973, when the paper decided to try a different format. The difference between volume CI and CII is visible above. “The COLLEGIAN is no longer a newspaper,” reads the front-page editorial in the first issue for the 1973-1974 school year. “It is a feature journal which concerns itself with previews, reviews, and the opinions of its readers.”

This change did not last long. The first issue of the next volume (under the leadership of current Bloomberg News chief Matthew Winkler) was back to tabloid, and an editorial (this time on page two) once again refers to the publication as a newspaper. “In our efforts to become more complete, we have abandoned the small magazine format of previous Collegians.” 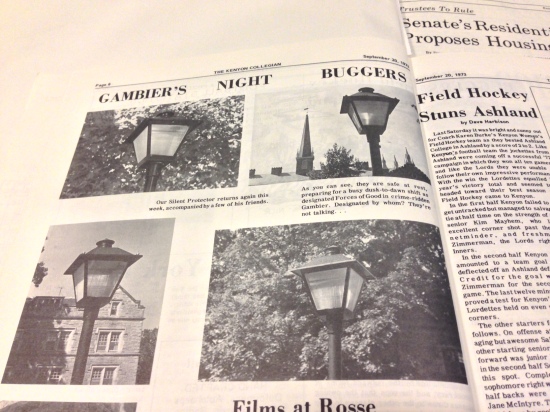 One reason the magazine format might not have worked out is because of features like Sept. 20, 1973’s “Gambier’s Night Buggers,” a full page spread that seems to be nothing but photos of ordinary lamps. “Our silent protector returns again this week, accompanied by a few of his friends.” Wow, way to gender a lamp. “As you can see, they are safe at rest, preparing for a busy dusk-to-dawn shift as designated Forces of Good in crime-ridden Gambier. Designated by whom? They’re not talking…” 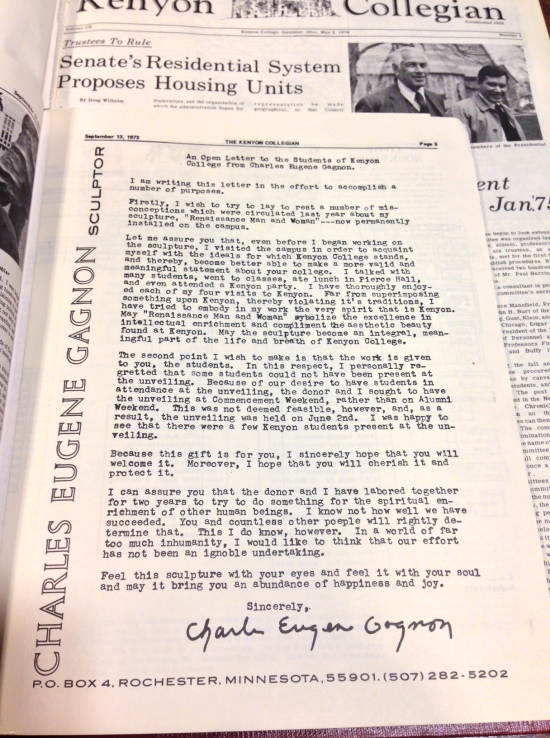 A somewhat more interesting feature, also from September 1973, is a full-page letter from Charles Eugene Gagnon, the sculptor of “Renaissance Man and Woman.” He hoped the sculpture would “symbolize the excellence in intellectual enrichment and compliment the aesthetic beauty found at Kenyon. May the sculpture become an integral, meaningful part of the life and breath of Kenyon College.” Gagnon also clarifies that the sculpture was a gift to the student body, and expresses regret that it had to be dedicated during the summer when most students were not present.

Let’s wrap it up with what is perhaps the most interesting ad ever to run in the Collegian. A small handwritten announcement alerts the Kenyon community to “2 Adult Features! In Color!” at the Vernon Theater in Mount Vernon’s Public Square. “‘Six Women’ –plus– ‘Ann and Eve’, rated X — No One Under 18, All Seats $2.00.”

If only we’d been there then.