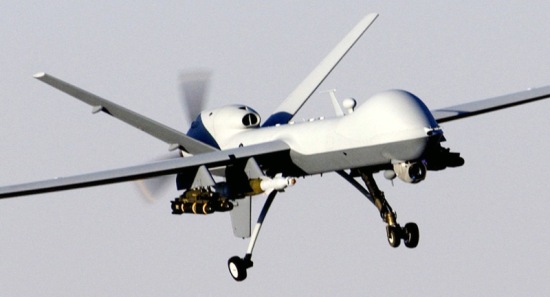 US intelligence agencies have expressed concern over the impact of troop withdrawals on our drone program.

The Lead Story: The drone program, a defining feature of President Obama’s foreign policy approach, could face new difficulties taking on Al Qaeda and its affiliates if US troops are forced to withdraw from Afghanistan this year. Reports the New York Times:

If Mr. Obama ultimately withdrew all American troops from Afghanistan, the C.I.A.’s drone bases in the country would have to be closed, according to administration officials, because it could no longer be protected.

It’s Map Monday, yo. Check out The United States of Craigslist.

Turns out that Spam, the “gelatinous” meat you know and love, is extremely popular in South Korea. In other news, lobster used to be served to prison inmates.

Apple will release a pair of new phones (probably this September) with larger screens, reports the Wall Street Journal.

Edward Snowden: There are “significant threats” on my life.

The Long Read: “Darkness in August” explores the murder of Christopher Lane, a 16-year-old boy from Australia who was gunned down in Duncan, OK.

The Weather: For most of us the question this week is: will the weather we’ve been having cause school to close? I can’t say (probably not), but this Tuesday the low is expected to be around -7, so maybe go inside when the sun sets? Temperatures won’t even break the freezing point until Saturday, when we can look forward to a “wintry mix.”