November 3, 2016 By Emily Blanquera in Features Tags: athleisure, Is womb-mates only for twins?, Kenyon siblings, The Sawayas 3 Comments 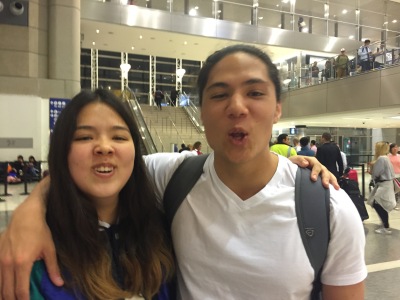 Two years apart, Ambert (’17) and Dounia (’19) Sawaya have never shared a dorm room here at Kenyon, but they do share the same mom. By some stroke of chance ended up in front of me in the Peirce atrium. It’s not too often that siblings have the chance to share their college experience, so I was jazzed to sit down and chat with these womb-mates about the wonders of living on the hill alongside a brother or sister. This piece is the eighth in our series of sibling relationships here at Kenyon College.

Was having your older brother here a big draw to come to Kenyon?

Dounia: It definitely helped in that I had visited the school earlier, and it also helped because he had actual experience in the school. We have essentially the same background, so he knew a lot and shared it with me, which was really helpful in choosing schools. It’s also just comforting knowing there’s a sibling or family member on campus, because I was nervous about moving away.

How did you feel about Dounia coming here?

Ambert: Personally I thought Kenyon was one of the better schools for her. I think it fits her better than me, to be honest. She came in and ran away with everything and is doing pretty well so far. And also what she said, about having someone who’s family here is pretty nice, coming from San Diego. It’s nice to connect with someone. I think I call on her the most because I need help on a lot of things, especially when I’m sick, I can say, “Help, I need medicine!”

Do you see each other often?

A: I think it’s gotten less since last year. I’m biochemistry, she’s MLL, I swim, she does Fools on the Hill. It’s totally different in terms of Kenyon experiences in general.

D: That’s so true. Last year I definitely think I had more free time, and so did he. Now he’s working on comps and I just have a lot of work coming this time in the semester. He lives North now. Last year he lived South and I lived North, so now it’s a little easier, but we still don’t really run into each other on campus.

Do you hang out together on the weekends?

A: We have a lot of mutual friends on campus, so it won’t be too much of a surprise if I see her at a party, or if she tags along with me to go somewhere else.

D: Like the Swimmer NCA, that’s pretty fun to go to when it’s poppin’. On Monday we carved pumpkins together, that was fun!

A: A lot of activities like, I don’t know, what did we do the other day? Oh, after the meet-

D: -We went to Chipotle.

A: Yeah, we’ll have lunch together or I’ll text her if she wants something to eat when I’m out of town.

D: Sometimes if there’s a show we’ll go to it. We went to Star Wars at the movie theater that one time! That was fun.

D: I did his make-up and his costume! It’s a sometimes thing, but it’s fun.

He called on her. She answered.

Has living at Kenyon together made you see new sides of each other?

A: I came to Kenyon as a freshman, so she was a junior in high school, and she really started to get into theater and had been playing roles in theater. So I never got to see any of that at all, actually. She was making a lot of new, different friends. So this is really the first time seeing her being socially active and seeing her do things she actually wants to do. When I was in school she had to be dragged to all my swim meets and things like that, so I never got the opportunity to see any of her extracurriculars.

D: On the flip side, I always saw him as a swimmer. Even in high school, we never really saw each other that much because he left early to go to practice, and then he would leave right from school to go to practice. Some days I didn’t even know if he was on campus, but now I see him interacting with other people. And in an academic sense too, people are always like, “Your brother is so smart!” And I would go visit him in the lab he worked in, and it’s so cool. I’ve never seen him work as a student. And again, seeing him at parties is really different. And he has his girlfriend. I think seeing a sibling date is always really interesting.

Do your parents like having you in the same place?

A: They both love Kenyon a lot. They’ve really experienced community college and state universities, and coming to Kenyon and learning about it was really a shock. And I think they thought this would be what’s best for us, so they really encouraged a liberal arts education.

D: When it came to the college process, it was way easier for me than for Ambert. I just applied ED here and to like, two other schools. So my mom was really chill with that and wanted it to be easy. And we went to the Kanye concert, and I told my mom about it. I expected her to be like, “You went to a concert instead of doing your work?” But she was like, “That’s so nice! You went to a concert together, aw!”

A: Yeah, she encourages us to have lunch once a week.

D: She doesn’t have a super close relationship with her brother because he lives in China and she lives here, and so she always encourages us to stay close.

Which Kenyon fashion trend best represents your dynamic as siblings?